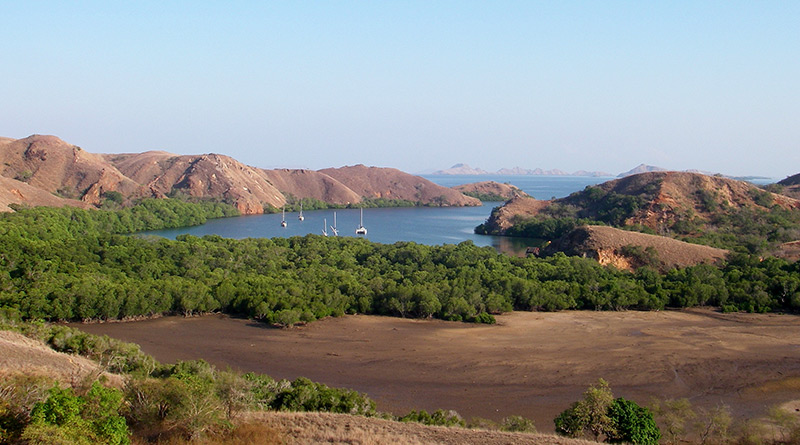 This Komodo National Park has 75,000 hectares area, and Komodo Island is the largest area of all the park, which is about 34,000 hectares, and followed by Rinca island of 20,000 hectares.

Komodo National Park was established by the government in 1980 and followed by the designation of Komodo National Park as a World Heritage Site in 1991. Formerly, in 1938. Padar and some area in south and west Rinca was declare to be a wildlife sanctuary. Then, in 1965, Komodo island is also formally included to be the sanctuary.

The natures’ condition in the Park is mostly dry, rugged and hilly. The landscaoe is about the combination of ancient volcanic eruptions and more recent tectonic uplift of sedimentary seabeds. The irregular coastline is indented with rocky headlands and sandy bays, and there are many framed by soaring volcanic cliffs. Komodo island  is having 35km long and 15km wide, and it is mountainous on a north to south axis, with an average altitude of 500-600m. The highest peak is in Satalibo (735m) in the north.

The flora ar most of the island are lontar palm savannah with remnates of rainforest and bamboo forest at higher elevations. On Rinca the land rises gradually from the north coast to a plateau that ends at Mount Dora (667m) in the south.  The rugged south coast is very sheer as a result of volcanic activity in distant past, as evidenced by the crater bay in which Nusa Kode nestles.

About the fauna; the very significant living creatures are, of course, the Komodo. Komodo dragon (Varanus komodoensis) is the largest habitat in this national park. Besides, there are also Sunda deer (Cervus timorensis), wild buffalo (Bubalus bubalis), wild boar ((Sus scrofa), the macaque monkey (Macaca fascicularis), wild horse (Equus qaballus) and numbers of birds. All the large mammals have been introduced by man, but indigenous frogs, snakes and lizards abound on the island.