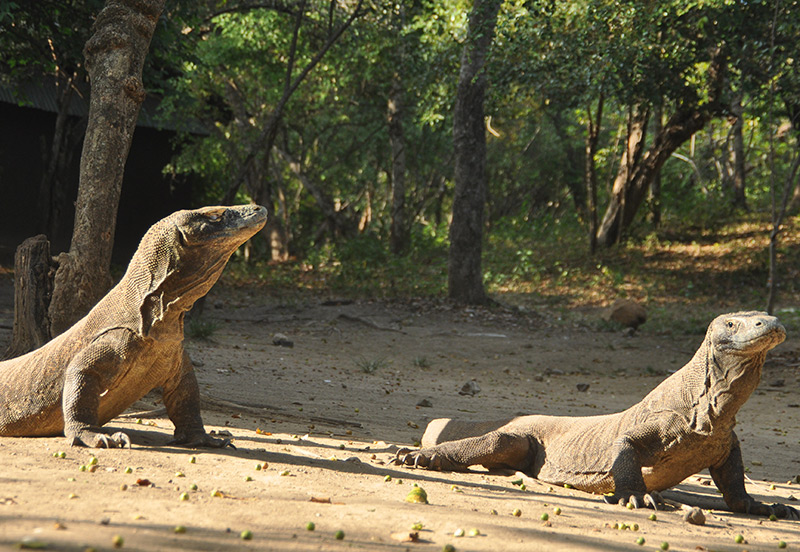 The Komodo National Park is located in Indonesia Wallacea. Wallacea region formed by the confluence of two continents that make up the unique row of volcanic islands, and consists of birds mix and other animals from both continents Autralia and Asia. The island itself has 1,817 square kilometers total area. In this conservation area, 2500 komodo dragons live scattered in several major areas of Komodo island, such as; Rinca island, Padar island and Gili Mota. Komodo dragon habitat is outdoors with savanna grasslands, rain forest, white sandy beaches, coral reefs and crystal clear water beach. In this area, we can found other animals such as horses, wild buffalo, deer, wild boar male, snakes, monkeys, and various types of birds.

Komodo National Park also has amazing underwater life. The divers states that Komodo island is one of the best dive sites in the world. With stunning views of sea bottom where there are 385 species of beautiful corals, mangroves and sea grass, as well as home to thousands fishes, 70 sponges species, 10 species of dolphins, 6 kinds of whales, green turtles, and various types of sharks and stingrays. The combination of a variety of vegetation in the park provide a good environment for different types of animals in this region.

There are four villages in Komodo National Park. Komodo Island has one village that is Komodo village; Rinca island has two villages namely Rinca and Kerora, and Papagarang island has one village, Papagaran village. This location can be reached from Kupang, boarded a plane to Ende then forwarded by minibus to Labuan Bajo town for 10 hours journey, then we will go to Komodo Island by speed boat for 2 hours.

Most tourists who visiting the park are foreign tourists, which they call the national park is the "world unto itself". As far as the eye can see, there are nature scenery with some palm trees reaching to the sky which has background vertical chain of mountains, barren impression on the savanna but boisterous by some of birds, wild horses, and giant reptiles sounds. Swimming and bathing under the sun and Flores blue water; is a world unto itself and unforgettable experience for the tourists.

Some interesting objects to visit: